Homeless people living in The Ark camp on Oxford Road were refused an adjournment to appeal for legal aid today, as a judge at Manchester Civil Justice Centre granted Manchester Metropolitan University and Manchester City Council a possession order over the occupied land.

The judge also refused an appeal against his decision but granted a six day stay of execution while an appeal application is made to a higher circuit judge. Later, top poet Lemn Sissay, Chancellor of Manchester University, visited the camp to show support. 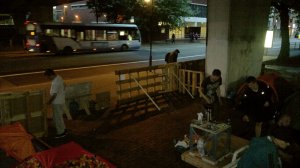