The Rector of St Ann’s Church, Nigel Ashworth, held a meeting with the homeless protestors in the church chapel on Thursday the 4th of June. The Rector said the meeting, with refreshments, was a “welcome to the neighbourhood” for the protestors and that St Anne’s church, consecrated in 1712, was “an open church, and they were welcome to attend the regular free music performances available”. He added that “there would always be a sympathetic ear available if any of the protestors wanted to discuss their troubles”

Danny Jones is an activist supporter of the Homeless Rights of Justice Manchester campaign who has been with the camp since day one. He explained to the Rector that the protest initially had been “only planned for one night” on April the 15th in Albert Square. As more homeless people joined the demonstration, they became aware of the benefits (security, access to information, food and the support of their peers) the homeless people received from being in the camp. 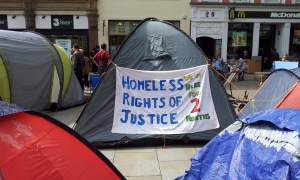 Due to the camp becoming a “homeless resource”, and the amount of support it was getting from the public, it was decided to keep the protest going. He also described how the activists and homeless members of the protest group were “working well together” and had formed a community dedicated to promoting the aims of the protest.

The aims of the protest are set out in an open letter to the council, which can be signed to show support for the protest. The council recently replied to a 38 Degrees petition, in support of the camp that was handed in on the 13th of May, the reply can be read in full here, the gist of the reply was that the council were doing all they could to re-house the homeless.

Rhetta Moran from RAPAR, a local human rights organisation that has been supporting the camp since Albert Square, was also present at the meeting. Rhetta praised the sense of community within the camp and the sense of safety it engendered for the homeless protestors. The “unique” nature of the camp was also raised, and that it was becoming increasingly important in highlighting the plight of the homeless nationally.

Some of the homeless protestors raised the issue of how dangerous it could be on the streets, and occasional abuse they have received from drunk people passing the camp at night. The Rector said he understood that the streets were particularly dangerous for single homeless people, and was sorry to see that “Manchester had the third highest level of drunken abusive behaviour in the country”. Other protestors also thanked the Rector for inviting them into the Church and offering his support to the camp members.

The Rector said it was important to dismiss the”negative stereotypes” that some members of the public hold against the homeless, and that the “Links between us are more important than what separates”. He added that the “camp members need to be, and were, good ambassadors for the homeless” and praised the camp members for the good order of the camp and their behaviour while in St Ann’s Square. 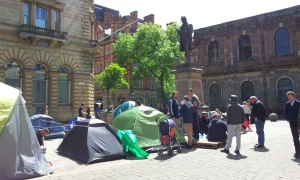